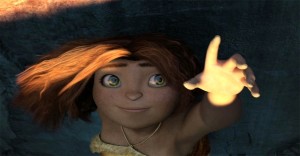 My office was closed yesterday due to the heavy snowfall, so I got to stay home with my kids. After I finished shoveling out three driveways (mine and two neighbors) I had the pleasure of sitting down with my kids and picking out a movie to watch together on Netflix. We settled on The Croods, not knowing what we were in for. I knew it was made by Dreamworks so I knew it would be beautifully animated, but what about the story and content? My girls and I were all pleasantly surprised. The story was original, with equal parts laugh-out-loud funny, edge-of-our-seats action, and heart-warming sweetness.

In a nut-shell, The Croods are a family of old-fashioned cavemen who survive their pre-historic world by playing it extremely safe, and never doing anything outside of their safe routine in or near their cave. Everything changes when the teenage daughter, Eep meets a teenage boy named Guy who has moved beyond the cave stage and is heading toward a safer land, because something cataclysmic is on the way. The Croods, headed by Grug the father, are forced to flee their cave and follow Guy when their cave is destroyed. Most of the plot revolves around their adventures as they travel an increasingly dangerous landscape, heading toward a safer existence in the light, away from the darkness.

This theme of following the light was a refreshingly Christian type message, although there was never any real mention of God in the movie. I also liked the pro family theme that was present throughout as well. The Croods are a solid, loving family with a father, a mother, three kids, and even a grandmother. This traditional family structure is never belittled or made to look old-fashioned, but is instead, held up as the basis for a loving, happy life. I understand that there are many in today’s world that don’t have this type of family unit, at no fault of their own, and I don’t suggest that they have any less chance of happiness because of their lack of a mother or father. However, I do believe it’s a great thing when movies celebrate the biblical model for families as a goal to strive for. I think this is especially good for our kids to know what a family is meant to look

like as they dream about their futures. So, I applaud The Croods for getting their message right. Not only that, but they gave us a well written, funny, exciting movie to boot. I give The Croods a solid STAR. For more info and other reviews on The Croods see it here at rottentomatoes.com