Because I am the author of two middle-grade fiction books, I have a special interest in seeing quality books from that genre get the attention they deserve.  As a book reviewer, I try to spread my book reading time out between my three favorite genres; science fiction, fantasy, and middle-grade fiction. In the past, I tried to choose my favorites from all 3 genres and squeeze them into one all-inclusive top ten list.  I found that my favorite middle-grade books had a tough time competing with my favorites from the other two genres. Not because they are lesser in quality, but more because I’m not the target audience for those books. My interest in MG fiction comes from my experience as a writer, not as much as a reader. As a writer, I have a great appreciation for a well-written MG book that is appropriately written for its younger audience. I am not that audience, but I think I have a good understanding of what that audience is looking for. That is the perspective from which I’ve approached the list below. These are the middle-grade fiction books that are successful at being great books for their target audience. They are fun, engaging, and imaginative. They don’t speak over the head of their audience, nor do they speak under their intelligence.

This year I read ten middle-grade books and reviewed each one of them. The four that I’ll be highlighting here are the cream of the crop. These are the ones that I would recommend to anyone, young or old, who is looking for a well-written middle-grade fiction book to read.

Also, I should point out some of these books were written and published before 2019. The qualifying factor here is simply that 2019 is the year that I read and reviewed the book.

Without any further ado, here are my top 4 Middle-Grade Fiction books of 2019.

MY REVIEW – Arestana: The Defense Quest by Shawn P.B. Robinson is part two in the Arestana series for young readers. It continues the story of young Liam as he gets pulled into the world of Arestana for another adventure. This time he must lead the armies of Arestana in defeating an attacking enemy. Liam is only a boy and knows nothing about warfare but that doesn’t matter because most Earthly logic makes no sense in Arestana. Once back in the strange land, Liam joins up with his old friends and makes a few new ones. Everyone is just as silly as ever and Liam finds a host of new peculiar problems to work through in the crazy mixed-up world of Arestana.

Author Shawn P.B. Robinson’s humorous style of writing remains consistent through both books of his that I’ve read. Somehow he manages to keep each scene fresh with new gags that kept me smiling and laughing out loud throughout. Even running gags, like one character who is obsessed with making soup, remain funny because Shawn is constantly putting new twists on jokes, making the gag more and more absurd as the story goes on. There is also plenty of action and adventure in this story, just as there was in the first one. The colorful cast of characters engages in many battles with a host of unusual enemies. Parents can rest assured that the battle scenes are never violent or bloody in the least. Lots of danger is threatened but silliness always wins out over violence.

I’ve thoroughly enjoyed both Arestana books but I have to say that book 2, The Defense Quest is even better than the first. There is more depth to the characters plus more intricacies in the plot that made it very satisfying. I heartily encourage fans of the first book, The Key Quest, to continue with book 2. The plot gets thicker, the characters get more interesting, and the humor gets even funnier.

#2 – MY DAD IS A MAD SCIENTIST: THE ADVENTURES OF UBERGIRL – by Matthew S. Cox 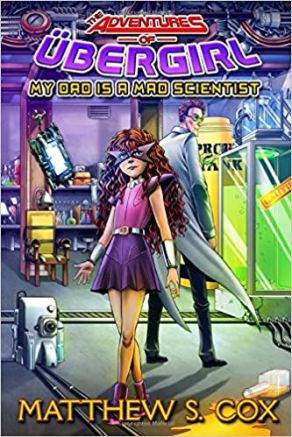 MY REVIEW – My Dad is a Mad Scientist is the first book in a new series by Matthew S. Cox. The series is called The Adventures of Ubergirl. Meant for middle-grade readers, this is a first-class superhero tale brought down to a kid’s level. Its main hero is a smart nine-year-old girl named Kelly who, before she received her powers, was considered a loser at school. When the transformation happens, as a result of aliens landing on Earth, Kelly’s life is turned upside down. Soon, she has Superman type powers crammed into her little girl body. The twist in this story involves her father. He also receives powers as a Mad Scientist. Much to Kelly’s dismay, he has become a villain and she is forced to deal with his evil shenanigans. Will she fight against her own father? Or, will she remain an obedient daughter and stay out of his way?

Author Matthew S. Cox is an expert at weaving fantastic stories about extraordinary young girls caught up in crazy circumstances, and he doesn’t disappoint in this young superhero tale. This book is imaginative and fun in many ways. All of the characters are distinctive with colorful personalities. The plot moves with enough speed to keep young readers glued to the pages. I thoroughly enjoyed reading the adventures of young Kelly as Ubergirl.

My only caution is that there are a couple of scenes where Kelly and her best friend Paige are in some serious life-threatening situations. Sure, they always survive but the fact that the person who puts these young girls in those situations was one of Kelly’s parents felt unnerving to me. Kids who watch dramatic superhero and fantasy shows on TV probably won’t be bothered by those scenes, but more sensitive kids might have difficulty reading about a parent who is threatening to slice their own child in half with a slow-moving laser beam.

MY REVIEW – Arestana: The Key Quest, by Shawn Robinson is a humorous and imaginative adventure for young readers. The story follows Liam, a boy who is magically flushed into another land that is similar to Earth but much sillier. Liam soon meets up with a group of odd but friendly Arestanians who team up with him as he seeks his way back home. Before he can go home he’s sent on a dangerous quest. If he and his friends can complete their quest without getting killed by dragons or booger bullies or fluffy kittens, then the Kingdom of Arestana will be saved and Liam will be allowed to go home.

Author Shawn Robinson has a natural knack for weaving an exciting adventure that contains just enough danger around every turn but never becomes violent. He uses humor to take the bite out of every perilous scene and leaves his readers laughing and cheering rather than cringing in horror. It’s seldom that I find a book that can make me laugh, but this one had me laughing out loud many times throughout. Arestana: The Key Quest is perfect for parents to read to their children at bed time. Not only will the kids have a good time listening, but parents will get plenty of good laughs while they read. I can also see this as a great book for young readers to read on their own. The storytelling is well done with plenty of suspense and drama to go along with the humor. I’ll be looking forward to reading more of Liam’s adventures in the strange land of Arestana.

MY REVIEW – This is book #1 in the hugely successful Artemis Fowl series by Eoin Colfer, and it does a good job of introducing our main character. Early on in the reading I was surprised to see that Artemis is not what I’d expected him to be. I imagined that he was some sort of super-spy who defeated evil villains. On the contrary, Artemis Fowl is actually a supervillain. I hesitate to call him evil as the book does show that he has a good side although it doesn’t show up in his career choices. We are also introduced to his manservant named Butler, an interesting character who quietly provides the muscle to go along with his master’s brains.

Artemis’s dastardly plan involves stealing something of value from a magical race of creatures known to us humans as faeries. The book goes into great detail in describing the faerie race and gives us a full cast of very colorful faerie characters. The main faerie character is Captain Holly Short, a spunky female faerie that is kidnapped by Artemis. That event sets off a tense standoff between the boy genius, Artemis Fowl and the faeries commandos who are sent to rescue Captain Short.

I enjoyed reading Artemis Fowl. The plot was imaginative, funny, and exciting. It had great characters on both sides of the good-guy bad-guy fence. One interesting thing about the Artemis Fowl book is it’s never clear who the good guys are and who the bad guys are. At first, that bothered me, but I got used to it by the end of the book. At that point, I realized it really didn’t matter to the overall plot. I think Mr. Colfer’s main goal was to give us a fun story about strong characters. He was successful. This is a great start to a very promising series of books for young readers.

One thought on “My Favorite Middle-Grade Fiction Books of 2019”