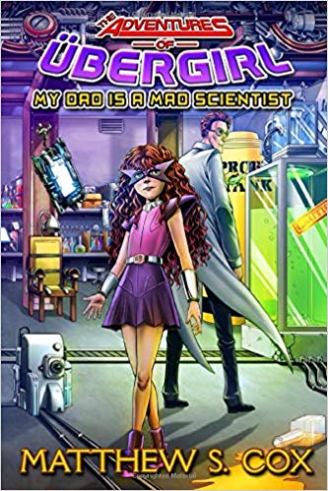 My Dad is a Mad Scientist is the first book in a new series by Matthew S. Cox. The series is called The Adventures of Ubergirl. Meant for middle-grade readers, this is a first-class superhero tale brought down to a kid’s level. Its main hero is a smart nine-year-old girl named Kelly who, before she received her powers, was considered a loser at school. When the transformation happens, as a result of aliens landing on Earth, Kelly’s life is turned upside down. Soon, she has Superman type powers crammed into her little girl body. The twist in this story involves her father. He has also received powers that have turned him into a mad scientist villain. Plus, her Mom is acting really strange, forcing her to deal with her Dad’s evil shenanigans on her own. Will she fight against her own father? Or, will she remain an obedient daughter and stay out of his way?

Author Matthew S. Cox is an expert at weaving fantastic stories about extraordinary young girls caught up in crazy circumstances, and he doesn’t disappoint in this young superhero tale. This book is imaginative and fun in many ways. All of the characters are distinctive with colorful personalities. The plot moves with enough speed to keep young readers glued to the pages. I thoroughly enjoyed reading the adventures of young Kelly as Ubergirl.

My only caution is that there are a couple of scenes where Kelly and her best friend Paige are in some serious life-threatening situations. Sure, they always survive but the fact that the person who was putting these young girls in those situations was one of Kelly’s parents felt unnerving to me. Kids who watch dramatic superhero and fantasy shows on TV probably won’t be bothered by those scenes, but more sensitive kids might have difficulty reading about a parent who is threatening to slice their child in half with a slow-moving laser beam.

One thought on “My Dad is a Mad Scientist – Book Review”