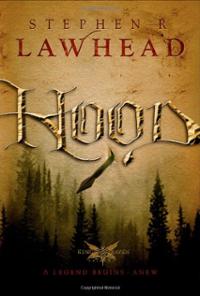 The official name of the series is The King Raven Trilogy, by Stephen Lawhead. That name makes sense within the story, but it’s much easier and accurate to say this series is an action-packed, fun retelling of Robin Hood. Although the 3 books are fictitious, they are all grounded in extensive research done by Mr. Lawhead into the actual roots of the story. He spent time in the British Isles researching the legend, where he found the character in various songs, books,  and oral stories dating back as far as the middle ages. Stephen Lawhead says, in the back of one of the books, there are different opinions as to where in the Britons, the legend originated. Lawhead’s Hood comes from the tales of the Welsh, which seems very different from the Robin Hood that most of us are familiar with. However, there are still enough similarities, to make it feel like a Robin Hood story.

The King Raven Trilogy consists of three books; Hood, Scarlet, and Tuck. Each book is named after a key character in that particular story. These books are filled with action, humor, and solid characters that you’ll grow to love as you follow their adventures. The whole series is steeped in realistic detail that brings the Welsh countryside and people to life. The story centers around a small group of desperate heroes, fighting to save their family, homes and the Welsh way of life from the onslaught of the British Empire. They use their wits to outsmart the

British, they fight with a new invention called a long bow, and they pray to God because they know their cause is just and right.

If you can only read one of the books, I highly recommend Hood, the story of a young man named Bran, heir to the throne in his Welsh homeland. When the British arrive he is driven into hiding in the dark forest where he has no other choice but to fight back as a Robin Hood type character who gives hope to the people and the will to fight. If you like Hood, then move on to Scarlet and Tuck. They continue the story through the eyes of two different characters in Bran’s group of rebels. I highly recomment those two books as well.

Who’s It For? This series is written for adults and teens. Some of the scenes are a bit violent and may be too intense for younger readers, however, none of the violence is excessive or over-the-top. By today’s standards, these books are actually pretty tame. There is no sex or fowl language, but there is a good amount of beer drinking and drunkeness as was most likely the case in those days. I recommend this series for age 12 and up. Boys especially will love these books. Stars and Splats gives all three books a STAR!

For more info on The King Raven Trilogy and the author Stephen Lawhead, here is a link to his website.