INTRODUCTION – Long before computer animation came along, it was a given that every G-rated animated movie would have at least one goofy sidekick character injected into the script to keep the audience laughing. That’s because dangerous situations and evil villains are as necessary in kids’ movies as they are in movies for adults. Therefore, there had to be some way to keep movies from getting too dark or sad. The solution? Humorous supporting characters. These characters are never the star of the film, but they’re always somewhere close to the stars. They provide the balance that keeps us moviegoers smiling.

In this list I’ll be highlighting characters in films produced after 1995. That was the year the age of full-length Computer Animation truly began with the release of Toy Story. My only other criterion is to list the characters that made us laugh out loud. These are characters that were so well written, cleverly rendered, and perfectly voiced that they practically stole the show from their main characters.

I’ve listed them here from least to greatest (#1), but in my book these are all great characters. Each stands out above the sea of supporting characters that populate the growing list of animated features that are released every year.

The whole idea of Mr. Ping (a duck) being the father of Po (a panda bear) is funny right off the bat because of the physical element alone. The fact that Mr. Ping is oblivious to their differences, and plays the role of father with all sincerity makes him even funnier. He’s also funny because of his devotion to his life’s work, cooking noodles.

(9) HEIMLICH from A Bug’s Life

This plump green caterpillar was one of the circus bugs recruited to take on the dreaded grasshoppers. The other circus bugs got laughs too but none so handily as Heimlich. His insatiable appetite and lack of courage kept us laughing throughout A Bug’s Life. His goofy German-accented voice made us laugh every time he opened his mouth, regardless of his lines. 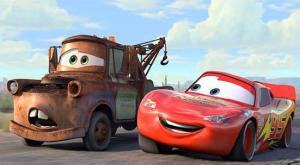 He’s the loveable dim-witted tow truck, sidekick to the lead character, Lightning McQueen. Mater’s voice was created in voice-over heaven, by comedian Larry The Cable Guy. The voice was a perfect match for Mater’s beat up, rusted appearance including his two huge buck teeth. His laid-back simple view of life made him the perfect contrast for McQueen’s big-city, success oriented character.

Favorite Quote: Mater – “You know, I once knew this girl Doreen. Good-looking girl. Looked just like a Jaguar, only she was a truck! You know, I used to crash into her just so I could speak to her.”

Lightning McQueen – “What… are you talking about?”

Olaf is the snowman given life by Elsa. His overly optimistic view of life provided just the right amount of humor as sisters Anna and Elsa struggled to come to grips with Elsa’s powers. Olaf wasn’t paired with any particular character, but rather he seemed to be placed right into the middle of the story to provide balance for everyone. He gets extra credit for having body parts that can separate and reassemble in hilarious ways.

(6) DONKEY from the Shrek movies

Favorite Quote: Donkey – “We can stay up late, swapping manly stories, and in the morning, I’m making waffles!”

(5) The Penguins from the Madagascar movies

This one, along with my #2 pick is not one character but a group that functions, more or less as one. It’s the team of four penguins, collectively called “The Penguins”. Together, they’re so funny they could easily have a movie of their own; and they’ll be doing exactly that in March of 2015. They’re always on a mission that goes wrong and the results are hilarious. Great interaction between the exaggerated characters, along with over-the-top voices make this group scene-stealers every time.

For those who may have forgotten about this underrated movie, let me remind you that Bolt is a dog who stars in a television show where he has super powers. When he realizes he’s just an average dog with no powers, Rhino the hamster comes along and sustains Bolt’s confidence with his overly zealous attitude. Rhino is a super fan of Bolt’s, so much so, that he seems unable to separate the world of TV special effects from reality. This provides for many humorous scenes where Rhino, whose personality is Captain Kirk meets Die Hard on steroids, does some outlandish stunts. As icing on the cake, Rhino is stuck inside a plastic hamster ball for most of the movie, which gives us lots of laughs just watching him roll from place to place.

She’s the blue fish that joins Marlin on his perilous journey to find his son Nemo. Without Dory, this film could have easily been suspenseful and sad, but she’s so loveable and her inability to remember anything for more than a few seconds provides many funny moments. Clever writing and Ellen Degenerous’ voice gives Dory a loveable quality that keeps us laughing through most of the movie.

Favorite Quote: (as Bruce the shark slams into the door trying to get to Dory and Marlin on the other side) Dory – “Who is it?”

(2) MINIONS from the Despicable Me movies

The Minions are actually hundreds if not thousands of characters that are practically identical with the exception of a few physical differences. They’re all yellow, short, cute, and very funny. It’s never really explained what Minions actually are, but they appear to be something less than human, possibly cloned, and most likely developed to implement one of Gru’s evil plans during his evil past. Being less than human opens the Minions up to all kinds of slapstick situations that would be too violent or sick for most animated characters, but for the Minions, it’s all in a normal day’s work. They also speak with voices reminiscent of the chipmunks, but in some sort of gibberish language that sounds just close enough to English that we usually have some idea of what they’re saying. We also love them because the Minions approach everything with the playfulness of a four year old child.

Favorite Scene: The minions go to a supermarket in an effort to find a new unicorn toy for Agnes. During their shopping trip each of the three minions gets into mischievous situations in different parts of the store. The results are hilarious.

Dug could have been just another cute, friendly dog and Up would have been an “ok” movie, but by some stroke of genius, the producers at Pixar gave Dug a special collar (invented by the movie’s villain) that gives him the ability to speak to humans. This character device alone bumped the movie Up into the category of “great” movies. Dug’s intelligence remains as dim-witted and simplistic as dogs really are, which makes his dialogue laugh-out-loud funny. Dug is also appealing because of his undying faithfulness to his new master Carl Fredrickson who wants nothing to do with him. Dug doesn’t get nearly the screen time as some of the other sidekicks on this list, but he gets so many laughs when he’s on the screen he deserves to be at the top of my list.