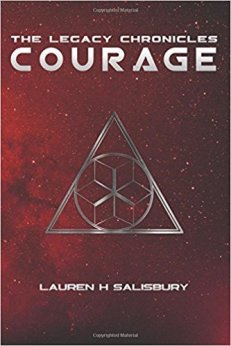 I thoroughly enjoyed Courage by Lauren H Salisbury. It’s a science fiction re-imagining of the story of Moses from the Bible. Instead of Israelites suffering as slaves at the hands of the Egyptians, Courage gives us the human race enslaved by a powerful alien race. Courage is book one in the Legacy Chronicles series. It covers the beginning of the story where, in the Bible, Pharoah orders the killing of all male babies and in desperation, Moses’ mother sends her baby boy down the river in a basket, leaving him in God’s hands. That’s how it plays out in the Bible but in Courage, the details are very different. Add in futuristic technology and an alien world with sadistic alien beings and you’ve got a story that bears very little resemblance to the biblical version. Yet the heart and soul of the original story is still present in the characters that inhabit Courage.

Courage, by Lauren H Salisbury, succeeds at doing a very difficult thing. It gives us a story about characters who believe in the God of the Bible that are not corny, one-dimensional, crazy, or preachy. The main characters are complex and endearing at the same time. Their belief in God is part of who they are and it sounds natural as they speak of their God as their only hope in their desperate situation. This is one of the reasons that I enjoyed reading Courage because I’ve read far too many Christian novels that seem to be written by someone who has never actually met a Christian. Ms. Salisbury, on the other hand, has a comfortable style of writing that makes her characters believable and her action exciting. The second thing I loved about Courage is that it’s a story of humans trying to free themselves from an oppressive alien race. Her handling of the sci-fi elements alone is worth the price of the book. To sum up; Courage is about great characters that have a positive view of God and they’re set in a really cool futuristic world. It doesn’t get much better than that.