For my Father’s Day celebration this year, I simply asked to have an Indiana Jones movie marathon at my house so that I could enjoy these classic movies with my kids. The day was a big success. We got through them all and I was able to introduce my kids to some of the greatest movies of all time.

Now that they are all fresh in my mind, I thought it would be a good time to rank the four of them in their order of greatness, from the least great to the most great. None of them are bad movies, so I won’t use the word “worst” or “bad” when describing them.

1 Raiders of the Lost Ark – This movie perfectly set the pace for a whole new genre of movies. Hollywood would follow with scores of copycat movies, some better than others, but none could match the genius of Raiders. Produced by George Lucas, Directed by Steven Spielberg, written by Lawrence Kasdan, and starring Harrison Ford, Raiders was the product of a dream team of film making. Only the Indiana Jones sequels could come close to matching the brilliance of Raiders.

2. Last Crusade – I loved the father & son dynamic, added to the mix.

3. Kingdom of the Crystal Skull  – Again, the family dynamic added lots of fun with Indy’s former girlfriend and their shared son joining in on the action

4. Temple of Doom – lots of great scenes, but it’s the darkest and most violent of the four. 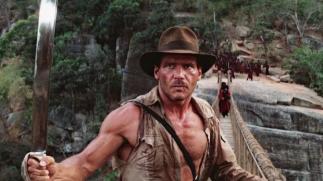 There are no winners in this category. All 4 include scenes of characters getting killed in very gross ways, as well as many more killings in ways that aren’t quite as disturbing, but numerous none-the-less. In all except Kingdom of Skull, it is implied that Indiana Jones sleeps with the female lead, although the most they ever is shown is some kissing and then waking up in bed together. There is a few to several cuss words in each film. Skull has the most cussing, while Raiders probably has the least, however it includes 2 uses of the Lord’s name in vain. I recommend these films for ages 11 and up.