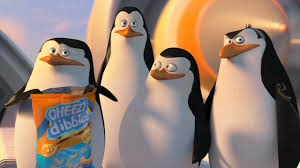 The Penguins of Madagascar movie (2014) is an action-packed comedy bonanza that was largely overlooked in the theaters. I, like most people, missed it during its theatrical run, but I caught it a few nights ago on Netflix. My kids and I thoroughly enjoyed this well-written story of the scene stealing Penguins from the Madagascar movies. The comedy was laugh-out-loud funny from start to finish. The four starring Penguin characters all have distinct personalities that play off each other hilariously. Here is a sample scene, one of many, just to give a taste of the clever banter that goes back and forth throughout the film. This is the scene where the youngest member of the group has just hatched from his egg and is joining the group:

Private: Hello! Are you my family?

[the three penguins look each other and nod knowingly, then turn back to face Private]

Kowalski: You don’t have a family, and we’re all going to die. Sorry.

Kowalski: What? I thought that was what we were all nodding about.

Skipper: [hits Kowalski] No one’s gonna die. [to Private] You know what you got, kid? You’ve got us. We’ve got each other. And if that ain’t a family, I don’t know what is.

Skipper: So adorable. [to Kowalski]  Kowalski, what’s our trajectory?

Skipper: And the other five percent?

Kowalski: Adventure and glory like no penguins have ever seen before.

Private: Where are going?

Stars and Splats awards a big STAR for Penguins of Madagascar. Kids and adults will have a great time watching this movie.