I’m a father of four wonderful kids. I know from personal experience and from professional studies that I’ve come across how important fathers are to the well-being of families. Their role is huge. Most fictional fathers, portrayed in television and movies, are bumbling clueless oafs, a fact that saddens me to no end. However, over the years I’ve come across a few movies that feature smart, loving and resourceful fathers. With Father’s Day just a few days away, I thought it would be appropriate to spotlight some of my favorite movies that feature strong father figures.

1. COURAGEOUS (2011, Sherwood Pictures) – Short Summary: When a tragedy strikes close to home, four police officers struggle with their faith and their roles as husbands and fathers; together they make a decision that will change all of their lives.

Why I Like It: This is easily my favorite movie about fathers. In fact, I will say it’s the best “father” movie ever made. The Dads are portrayed with realism and honesty as they go through the ups and downs of life. We watch them stick together as they go through unspeakable tragedy, and then rise up together as they find new hope. The film producers added just enough feel good and funny moments to keep audiences smiling as they wipe their tears through the sad story arc with a happy ending. Most of all, Courageous leaves us with a powerful message about the important part each father plays in his family, whether they have a wife and a couple of kids at home, or a child that they fathered out-of-wedlock. Every family needs its father.

2. The Croods (2013, DreamWorks Animation) – Short Summary: A prehistoric comedy adventure that follows the world’s first family as they embark on a journey of a lifetime when the cave that has always shielded them from danger is destroyed.

Why I Like It: Besides being a really fun movie with an unpredictable story, I was struck by the wonderful father character of the caveman family, Grug. His family is his life, and he will stop at nothing to protect them. At times in the story, he comes across as old-fashioned, but in the end, he is the savior of the family. His extreme love for his family is showcased here as the reason that they are able to survive many dangers and as the glue that holds their family together. 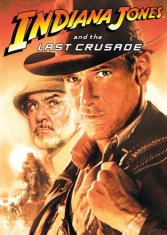 Why I Like It: The Indiana Jones series is one of the great movie series of all time. This, the 3rd in the series, adds a new layer of pleasure on top with the addition of Indiana’s father, Henry played by Sean Connery. Their relationship as father and son is fun to watch as they go through incredible adventures together. Beyond the typical bickering of an older father and his adult son, we see an underlying love for each other that is touching and feels very real.

4. Finding Nemo (2003, Pixar, Walt Disney Pictures) – Short Summary: After his son is captured in the Great Barrier Reef and taken to Sydney, a timid clownfish sets out on a journey to bring him home.

Why I Like It: When a movie is as perfect as Finding Nemo is in humor and action, incredible visuals, and snappy dialogue it’s easy to forget that the whole story is built around a father’s love for his son. Marlin, the clownfish will stop at nothing to find his son who he loves more than life itself.

5. Father of the Bride (1991, Touchstone Pictures) Short Summary: With his only daughter’s wedding approaching, a father finds himself reluctant to let go.

Why I Like It: This movie is a heart-felt and very funny portrayal of a father’s special relationship with his daughter. It’s well written and Steve Martin does a fine job as the over-achieving father who has a tough time letting his princess go.

One thought on “Great Fathers in Movies”