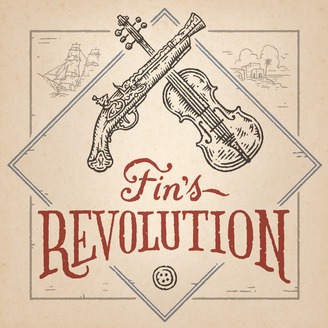 I’ve become a big fan of podcasts. Fin’s Revolution is as the top of my favorites list, and I couldn’t help but want to share this rare find with my readers. It’s by the author of two novels called Fiddler’s Gun and Fiddler’s Green. His name is Pete Peterson, and in the podcast he’s reading his books. Pete has a great voice for reading and he’s actually very good at doing different voices for each character. It’s as well produced as most audiobooks, but it’s presented here in podcast form.

The title Fin’s Revolution is the title he’s given the podcast as a way of encompassing both books. Fin Button is the main character, the scrappy young woman whose life is the focus of the story. I have listened to the first half of the podcast series, the Fiddler’s Gun portion. The story continues in the Fiddler’s Green episodes but they have yet to be released, as of this writing. I can’t wait to continue on with Fin’s journey. 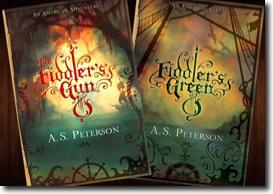 The story is set in the time of the Revolutionary War. When I began listening I thought I was getting into a story that took place in the midst of the war, focusing on some of the soldiers, perhaps? So far, that isn’t the case at all. The war is happening behind the scenes, but Fin’s adventures go far and beyond the war, only intersecting with it occasionally. The first half of Fiddler’s Gun focuses on her difficult upbringing as an orphan in a small town in Georgia. She is eventually forced to leave her orphanage due to some traumatic events in her life and she ends up on the run. Eventually she ends up on a pirate ship. I won’t give any more details than that. I hope you’ll listen for yourself as there are so many more twists and turns and colorful characters that you’ll enjoy discovering as you listen.

One reason I love this podcast is because it’s clean. It contains no sex or bad language, other than one curse word that seems to have been added to make a sharp point in one scene. There is a good bit of violence, but it’s only the kind of violence that one would expect when dealing with such extreme circumstances. Because of the violence, I would not recommend the podcast for younger kids. I can safely recommend this podcast for ages 12 and up, and I would definitely recommend it for adults as well as teens.