I finally got a chance to see Captain America: Civil War over the weekend. I know its been out since May of this year, but life has been busy and movie going funds have been low. My daughters and I have been patiently waiting for this, the next installment in The Avengers saga to come out on DVD.

The movie promised one of the largest cast of superheros ever assembled for one movie. There were familiar favorites and fresh new faces. This was going to be great, or so we thought. We popped our popcorn, poured our sodas, turned up the volume, clicked play and once again we were immersed in the world of good versus evil. Or were we? It might be more accurate to say good versus good, or maybe even evil versus evil. Therein lies the fundamental flaw of Captain America: Civil War. It was hero versus hero for almost the entire movie.

Sure, I knew this going into it. Its got the name “Civil War” right in the the title. The posters even sported the intriguing image of Captain America squaring off against Iron Man. It’s a great marketing angle. The whole idea of two of my favorite superheroes fighting each other brought on immediate curiosity. Looking back on it, that curiosity was akin to the morbid curiosity that comes over all of us when we stumble across a You Tube video that shows a real live automobile crash, or someone getting murdered. I normally skip right over those videos, but I have to admit that its sometimes really difficult. Something in me wants to watch even though I know I’ll regret it.

In the case of Captain America: Civil War, I gave into the curiosity knowing there was going to be a fight that I knew I probably wouldn’t enjoy, but I had to see it anyway. However, my comparison to the morbid YouTube videos stops there. Those videos guarantee darkness and they always deliver. Avengers, on the other hand, have always come with a guarantee of good winning out over the darkness. Sure, we expect the Avengers to have their dark moments too but I went into Cap A Civil War with the expectation that the darkness would only be temporary. I fully expected that the light would overtake the darkness well before the credits rolled and we’d be provided with the heroic ending that we expect from a Marvel Avengers movie. I waited patiently for the scene where the men and women, who had earlier been at each others’ throats, would come together for a final battle to defeat the real villain. That scene never came. 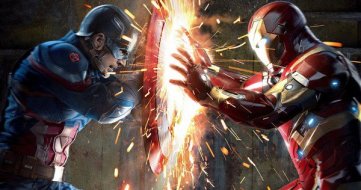 This is not so much a spoiler review as it is a warning review. I’m warning everyone who hasn’t seen this movie that the Avengers did not come together until the very last 30 seconds of the movie. Even that was more of a wink that better things might be coming our way in the next movie. The final climactic scene that I’d been waiting for, the scene that I expected to redeem this otherwise fallen movie, turned out to be the worst scene in the movie in terms of Avenger against Avenger.

I do have a few good things to say about Civil War. The action scenes were incredible to watch, as usual. Spider Man practically steals every scene he’s in. Ant-Man was also alot of fun to watch. I also liked every scene that involved the character called Vision.

However, I cannot recommend Captain America: Civil War mostly for the reason I’ve outlined above. Plus, there was more cussing in this one than in previous Avengers movies. But the biggest problem for me and my two young teenage girls was the sick feeling that all three of us felt as we watched our favorite Avengers pound each other until they were seemingly near death.

I have no problem watching superheroes bicker with each other, and even an occasional fist fight is fine. The fight between Iron Man and Thor in the first Avengers movie was actually a great scene. It worked because it didn’t take long after that scene was over for them both to see the need to work together and begin to respect each other. But, when the fight becomes the whole plot with no true resolution, it ceases to be a good superhero movie. I didn’t see the recent Batman V Superman movie, but I hear it also had a similar darkness to its story.

I know my little blog post is powerless to change the dark direction that both Marvel and DC studios have been taking lately, but I’m hoping and praying that future story lines will look up rather than down. Let our heroes be heroes. They don’t have to be perfect. Show us their faults and insecurities, but for goodness sake, let their good side always win out over the bad.

Why? Because our kids need heroes who are really good. They need to know that its better to be a good person than a bad one. They need to learn that being courageous brings good things for other people and for themselves. On the flip side, they need to see that selfishness and cowardliness hurts people including themselves. They need to learn to respect laws and do what they can to uphold them rather than brake them. I know that its not necessarily the job of movies to teach these things to our young people. We parents have the greater responsibility. I humbly accept that challenge. But, I fear that most parents in today’s world do not. They’re either confused about the difference between good and evil, or they just don’t care. Our superhero movies have a unique opportunity among today’s pop culture to make a difference for the good. We still look to them to show us what it means to be a hero. We’re looking at you Marvel and DC. Your movies can make a difference for good or bad. I’m hoping you’ll return to the good.