The CW Network TV series, The Flash plays like a classic superhero tale that the whole family can enjoy. My daughters (13 and 11) and I watched several episodes together this past weekend and we all thoroughly enjoyed it. As a superhero story it has everything going for it that one would expect. It’s about a likeable guy who gets extraordinary powers and ends up being a really cool superhero. Our hero, Barry Allen is surrounded by colorful characters that add lots of relationship drama that compliments the good hero verses bad villain plotlines. I thought the show did a good job of balancing the personal drama with the super drama. As thrilling as it is to watch The Flash zip down city streets like a lightning bolt, I’m pretty sure the show would get old really quick if it didn’t include such strong supporting characters with interesting subplots. One, in particular that I liked was Barry’s love for the two father figures in his life; his real father in prison and his adopted father that was still watching over him. 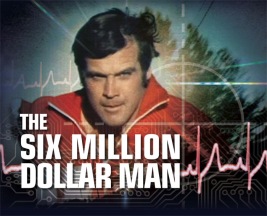 On the more geeky side of the television screen, The Flash also delivers original villains in each episode, plus great special effects. We’ve come a long way from the Six Million Dollar Man back in 1974. Anyone under 40 will have no idea what I’m talking about, but in order to portray Steve Austin running at super speeds with his bionic legs, that show’s go-to special effect was slow motion. Even though I was a huge fan of that show ( I was only 11 when it began), I have to admit that it always bothered me that they couldn’t come up with a better way to portray a man running so fast that he looked like a … flash. The new TV series, The Flash, gets it right. I won’t try to describe the special effects, but I’ll simply say, when he is running, the Flash looks like a true superhero.

My favorite thing about The Flash is that it’s almost squeaky clean, so far. It even made it onto PluggedIn.com’s 2014 List of Family-Friendly TV Shows. In the episodes that I watched, I heard two very minor cuss words uttered. There were some intense scenes, but none of them were bloody or gory in the least. There was also zero sexual content portrayed on screen or even mentioned in character dialogue. We find out early on that Barry has feelings for his child hood friend, Iris, who is dating a police officer, but the show portrays it all very innocently.

In this age of dark superheros who walk a fine line between good and bad, The Flash is a breath of fresh air. He is in his second season now. The shows I watched were in the first season. I hope the show keeps running in the right direction because we all need a really good hero to cheer for. A hero like The Flash!