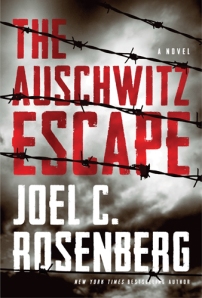 The Auschwitz Escape by Joel C. Rosenberg was a fun yet thought provoking read that I recommend to anyone, age 13 and up. The story, though fiction, is based on several true accounts from survivors of the Auschwitz concentration camp during World War II. It centers around a young Jewish man named Jacob who is forced to go to the camp where he, like most others, loses all hope and expects to die there. Through several providential events he becomes friends with a group of underground Jewish rebels who are plotting to escape. Jacob and the others become driven to find a way out, not just to save their own lives, but to tell the world about the atrocities going on inside Auschwitz Prison and hopefully bring back rescue for their fellow Jews. As we follow Jacob’s ordeal inside the prison we learn of the horrors of the day to day workings of the Nazi death camp. The story also includes lots of suspense, especially in the last fourth of the book when Jacob and a friend escape. It reminded me of some of the great escape movies that were popular when I was younger. Films like The Great Escape and Escape From Alcatraz.

The Auschwitz Escape is not necessarily meant for young adults, but I’m reviewing it here because I think it should be considered required reading for teenagers. It gives a very true-to-life account of what really happened to the Jewish people during World War II. It shows a side of the war that many would like to erase and pretend never happened. In my opinion, the holocaust is something we need to remember and talk about with our kids. We need to tell them how horrible it was so we’ll have a better chance of keeping it from ever happening again. Conversely, If we allow a generation to grow up thinking the holocaust was a lie or some kind of urban legend, then it’s just a matter of time before we have holocaust part 2. What better way to start a conversation about such an important topic than reading a book on the subject like The Auschwitz Escape that is well written and thoroughly researched.

One thought on “The Auschwitz Escape”