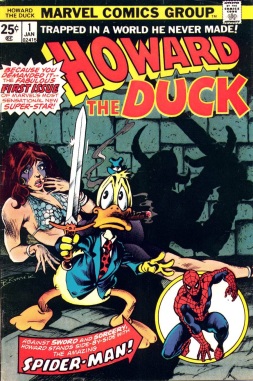 One of my earliest creative influences was an off-beat Marvel comic book series called Howard The Duck. The original series ran from 1976 – 1979. Sure, I loved the superhero comics of the day, but for some reason, this strange series about a talking duck with a bad attitude, trapped on a planet where he doesn’t belong, instantly became my favorite. I counted the days every month, waiting for the next issue. I learned to draw by copying some of my favorite Howard the Duck scenes onto paper. I found one of my drawings in my attic (drawn when I was 13) and I’ve included it here as evidence of my past devotion to this quirky comic book series. The pose that I’ve drawn was from the cover of issue#3, The Master of Quack Fu. As you can see from the faint eraser marks, I worked on this thing for hours and hours trying to get it right. 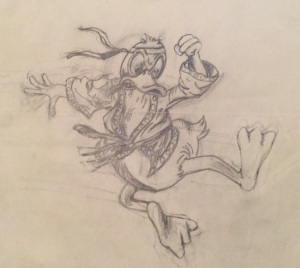 The original Howard the Duck was brilliantly written by Steve Gerber and drawn by several artists, most notably Gene Colan. I think I liked the idea of a reject from society getting tangled up in all kinds of supernatural events. He would bumble his way through all kinds of human-like problems as he took on the bad guys and somehow always came out on top more or less. Now that I think about it, my own awkward superhero has alot in common with Howard The Duck. It wasn’t intentional, I promise. If you’re not familiar with Glazed Man, check out my book trailer for a short animated scene.

Anyway, I’m writing about Howard because Marvel Comics is bringing him back with a fresh look, fresh writer and new storylines. According to an article at slashfilm.com, writer Chip Zdarsky will be attempting to keep the same spirit of the original series which thrusts Howard into two worlds that he finds quite annoying; one is the world of superheros and evil villains, the other is the world of hairless apes (humans). Here is a link to the full article at slashfilm.com. Below is the artwork that Marvel has released showing Howard’s new look. 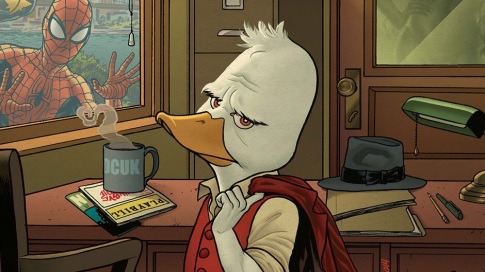 I must caution parents that Howard the Duck was never meant for younger kids. It’s sense of humor was a little dark and it poked fun at some of the social and political problems of its day. He smoked cigars and occasionally was seen holding a mixed drink in his hand. There was no cussing or sex involved back then, although there were some sexual jokes made from time to time. I have no idea how this new version of Howard the Duck will change for modern audiences, but my guess is that Marvel will again aim this comic at older kids. And, we all know that the norm for older kids, these days, is much more adult oriented than it was back in 1976. All I’m trying to say is, just because it’s a comic book about a talking duck, don’t assume he’s another Donald Duck. If anything, Howard the Duck is more like Donald’s strange uncle who never gets invited to reunions because he doesn’t get along with anyone.

One thought on “Howard The Duck is Back!”