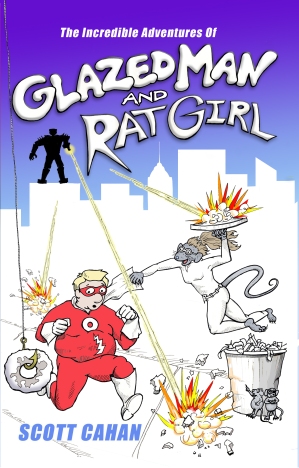 A superhero who gets his super powers from donuts, and a girl who keeps turning into a rat no matter how hard she tries to stop herself. Together, they stumble their way through a story of heroic adventure and bad eating habits. When the evil RoboCreep threatens their city, Glazed Man and Rat Girl are the only two people brave enough and foolish enough to stand in his way.
It’s a classic tale of good vs. evil starring the lovable but dim-witted Glazed Man, and the good hearted but totally berserk Rat Girl. Fast paced action meets side-splitting humor in this chapter novel that includes 100 illustrations, taking superhero storytelling to a whole new level. This book is targeted at young readers, but sophisticated enough for readers of all ages who like a good laugh along with their adventure.

CLICK HERE TO VIEW THIS BOOK ON AMAZON.COM. See a sample with the “Look Inside” feature. Available in paperback or Kindle e-book.

Glazed Man is a bumbling yet lovable hero whose superpowers come from donuts. Rat Girl is the half-human half-rat hero who knows no fear and will do anything to stop evi 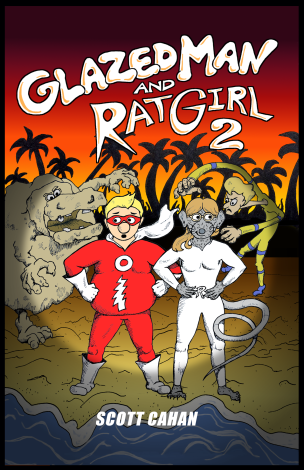 l. Together, they are faced with a new menace to Megalopolis; a villain named Plastic Head who is intent on turning every sugary treat into plastic. Glazed Man’s powers are useless without donuts to eat. Can he find some sugar to eat before Plastic Head gets to it first? Rat Girl has a personal ax to grind with the villain and her lust for revenge is causing more harm than good. Meanwhile, Rat Girl’s friends, the four talking rats, are running for their lives from a monster who followed them back from Mars. With so much trouble in every direction, it appears that Glazed Man and Rat Girl are out of their league, but they share a secret weapon that no villain can defeat; their desire to see good triumph over evil.
Part two of Glazed Man & Rat Girl kicks into gear in chapter one and never slows down. its 255 pages of madcap adventures, filled with loveable characters, satirical humor, and Christian values. Eighty-six hand-drawn illustrations add to the fun in this superhero story like no other.

CLICK HERE TO VIEW THIS BOOK ON AMAZON.COM. See a sample with the “Look Inside” feature. Available in paperback or Kindle e-book.