One of my passions is to see the Gospel of Jesus Christ communicated to the world in creative ways. Just because we’re talking about God doesn’t mean we have to preach a sermon, standing in a pulpit, delivering a dry monologue, using Biblical terms that many people don’t understand. We believers should use the talents and gifts God has given us to tell the lost world about Jesus in creative ways. Jesus did when he spoke in parables. Storytelling was one of the highest forms of entertainment of His day.

Therefore, I’ve compiled a list of Christians who have inspired me, throughout my life, by sharing Biblical truths with new and innovative means. They have used their creative abilities to share their message with excellence and creativity. These are the people who sparked my own imagination and helped me get excited about using my own gifts in hopes of creating some piece of art that would help an unbelieving world see Biblical truth in a new and exciting way.

His Chronicles of Narnia series of books have set the standard for communicating the Gospel of Jesus Christ in a creative and entertaining manner. I first read these books around 18 years ago when my older kids were small. Not only did they enjoy the series, but so did I, possibly more than they did. Since then I’ve also read two more of his fiction books that have had a strong influence on my writings; Out of the Silent Planet and Perelandra. Both are entertaining, thought-provoking Science Fiction classics and both teach great truths about Christianity without ever feeling preachy.

He wrote and illustrated the hugely popular Peanuts comic strip for almost 50 years. Charles was a Christian who infused much of his beliefs within the panels of his daily comic using subtly and humor to get his point across. Possibly the greatest cultural 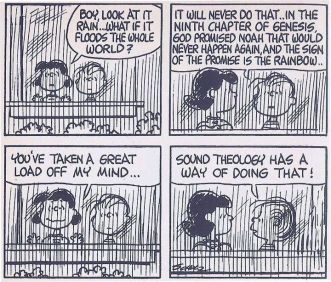 impact involving Christianity, perpetrated by Charles Schultz, was the classic Christmas TV special, A Charlie Brown Christmas that aired every year on one of the big three networks for more than 30 years. In that special, Linus read from the Bible, Luke Chapter 2, to let everyone at the Christmas pageant know what Christmas was really about. Charles Schultz was the writer of that special, as he was with all of his TV specials.

He was one of the founding members of the progressive rock group Kansas that was popular in the 1970’s. He was the creative force behind the band, writing songs,

composing, and playing guitar. The group was not overtly Christian, but who can deny the strong Christian influence in the song Carry on My Wayward Son. Read the story of the Prodigal Son in the Bible, Luke 15:11 and you’ll see what I mean. Another song that had tremendous secular success but teaches Biblical principles is Dust In the Wind. Mr. Livgren left the band in the early 80’s to pursue music with a stronger Christian message. He formed a band called A.D. that put out of couple of albums, also filled with great music. But, it’s the classic music from Kansas that I find the most inspiring. It’s some of the most creative and catchy music ever produced and they were embraced by secular audiences even though many of their songs had an obvious Christian influence.

He is the founder and early producer of the children’s video series, Veggie Tales. They are mostly enjoyed by Christian audiences, but I’ve seen them for sale in stores like Wal-Mart and for rent in some of the old big video stores. My kids practically grew up on 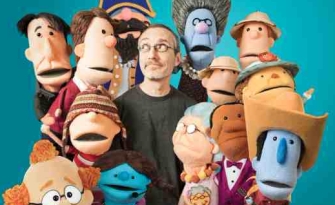 Veggie Tales and I’ve watched the videos with them many a time. What I found amazing about his videos was how flat-out funny they were, even as they taught solid biblical lessons. Mr. Visher had a knack for being able to entertain small children as well as adults at the same time. He has since sold Veggie Tales to another company and has started producing another series called What’s in the Bible. I’ve watched some of those videos and they are also well written and very funny.

Alex, along with his brother Stephen, has revolutionized Christian film-making. Their first movie, Flywheel, was a church project made with all volunteers. The production quality was low, but the writing and the heart of the story made up for it. They wrote and

produced four more films including Facing The Giants, Fireproof, Courageous, and War Room that were marketed to Christian audiences and were hugely successful. Each film was a step up in production value and budget. Their stories are unashamedly Christian and that’s extremely refreshing and real. They are funny and inspiring and hit audiences where they live, in the heart. Alex also plays a starring role in most of their films.

He is possibly the fiction writer that has had the greatest impact on me. His classic books, This Present Darkness and Piercing the Darkness revolutionized the Christian fiction market and made it OK to include supernatural elements in that genre. I read both books in the mid-nineties and was blown away by how entertaining they both were as well as how vividly they illustrated what’s going on in the spiritual realm. Other books of his that I loved were The Visitation and Monster.

I consider Mr. Taylor to be one of the most creative and prolific music artists of all time. His music mostly falls under the umbrella of  “Christian Contemporary” but

that’s somewhat ironic because he has received very little airplay on Christian radio stations. He was never one to make music for the masses. The bands that he created, beginning in the late 70’s, include Daniel Amos, Swirling Eddies, and The Lost Dogs. When I started listening to Christian music back around 1988, I was introduced to the group Daniel Amos and I was so excited to hear such creative and well-produced music that had a Christian message. Later, I became a huge fan of Lost Dogs. They can best be described as roots Americana music. In each of his groups, he pulled in other great singers and musicians to play with him, but Terry Scott Taylor was always the creative force doing all the writing and producing.

4 thoughts on “My Creative Christian Heroes”