I recently received glowing reviews for my book, Glazed Man & Rat Girl that I am proud to share with my blog readers. These 2 reviews are especially meaningful because they come from two people who are complete strangers to me. One of them is even one of the Top 500 Reviewers for Amazon.  You can read the full reviews here.. Below are a couple of excerpts. 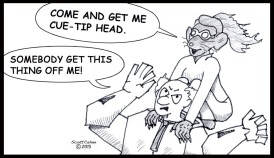 Reviewed by Tvtv3: “…. This unlikely duo makes an interesting team and join forces to stop the evil RoboCreep and his fiendish plans. The book is filled with illustrations (about one on every other page). It’s also really funny and somewhat endearing. Glazed Man is an everyman that most readers can really relate to. He has some of the same foibles and frustrations that most of us do, but despite this, he keeps persevering. Overall, GLAZED MAN & RAT GIRL is a very entertaining, witty, and charming young adult novel. I enjoyed it much more than the dystopian fiction that is currently all the rage in young adult publishing.”

Reviewed By Trishaa: “…. Johnny Crumb is known as Glazed Man for his ability to shoot sugar glaze from the palms of his hands and Martha is known as Rat Girl because she can turn herself into a ferocious rat. They team up as a do good force. Add to this humorous group a growing mass of Johnny’s dirty laundry that grows and grows and moves around (reminiscent of the Blob) and you have a hysterical story that any young boy would delight in. 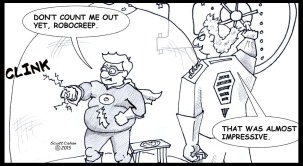 This story is accompanied by cartoons with language bubbles on almost every page and are quite well done. I know our son would have loved this book when he was 8 or 9 as we always had a long book going that I would read to him in the evenings. This would have produced many giggles from him and an anticipation for the next installment the next night. Dog poop and farts always would illicit gales of laughter from him.”